If you make your way to Tottenville, at the southern tip of Staten Island, you’ll find two things worth the trip. One is the south pole of New York City (and State): some inspired citizen marked the spot with an actual cartoon-style candy stripe pole. Beyond that point there be dragons, and New Jersey. The other thing is the Conference House. It was here, in 1776, that a single conversation determined the fate of the United States. 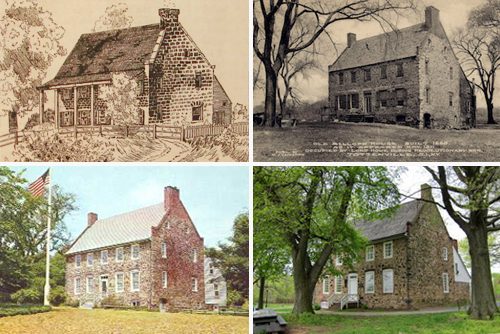 At the onset of the Revolutionary War, Staten Island was the site of the enormous British troop landing; the seventeenth-century house (it’s the oldest standing manor in New York) belonged to a prominent Loyalist. Just after the Battle of Long Island, British admiral Lord Richard Howe held a meeting in the house with Benjamin Franklin, John Adams and Edward Rutledge, who had made the crossing together from New Jersey in a rowboat. Over a tense snack of wine and mutton, Admiral Howe said: “This is getting ridiculous. What do you say we just all shake hands like gentlemen and stop killing each other.” Benjamin Franklin said, “Okay. But we still get to be our own country.” Howe sprayed a fine mist of claret. “Ah!” he choked, “no, that won’t do at all.” Franklin said (this is all paraphrasing) “Wrong answer, Dick.” The yanks rowed back, the Revolution continued, and today we drive on the right side of the road and play baseball and make great action movies and whatnot.

Every year in mid-September, historical reenactors take over the Conference House. I’m a great fan of the idea of historical reenactment, but it usually comes off a little sad. Not here. I think I was officially sold when I saw the woman in bonnet and petticoat pause from stirring a smoking iron pot of corn chowder to casually wipe the tears from her eyes with her apron. Next to her was a smiling, well-built young lady churning butter. Later I ate some of the butter on fresh bread and I can say: churning butter is worth the trouble, especially somebody else’s. I met Private Clark, a poor farmer who joined the Loyalists because of his unwarlike nature. When I asked how he thought the conference might turn out, he blinked, “I would not hazard a guess,” and nibbled on some hardtack he kept in a Ziploc baggie. I appreciate that his uniform looked like it had been stored under a dead horse: 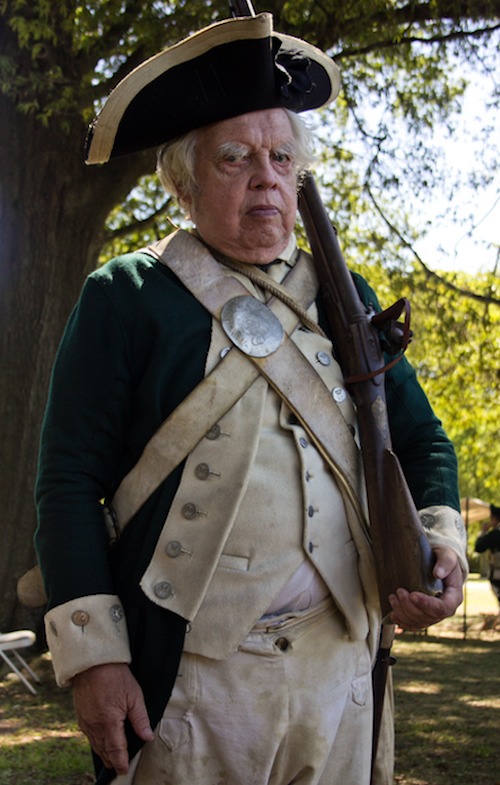 What makes the Peace Conference festival work is the connection to the precise location of history: it was here that the epic meeting took place. You get quiltmaking and dulcimer music, and a guy who makes leathergoods with porcupine quillwork and another who shoots muskets at the sky, but the main event is a reenactment of the conference itself. Every year Ben Franklin, John Adams and Edward Rutledge make the passage from New Jersey over the Arthur Kill, usually in a period rowboat. “The boat got stuck on the George Washington Bridge,” says a lady from the nearby Raritan Yacht Club. “We had to use a motorboat instead.” Nobody minds. After a dramatic trudge up the hill to fife and drum, the actors take seats around a table and recreate history. If this isn’t your thing, head back down to the beach and just stare. You are still within the boundaries of the world’s most batshit metropolis, but it looks like Nowhere. The woods and shores give visitors, according to the Conference House museum, “a glimpse of a pre populated landscape of New York City.” If you want to imagine an untroubled Algonquin fishing oysters in, say, the year 1608, this is the place. 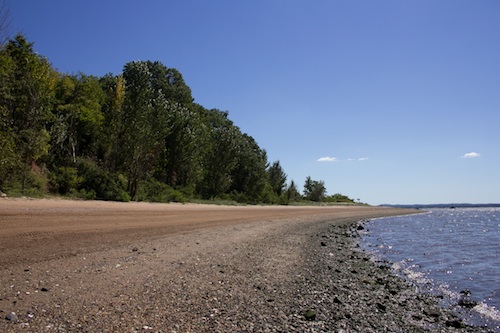