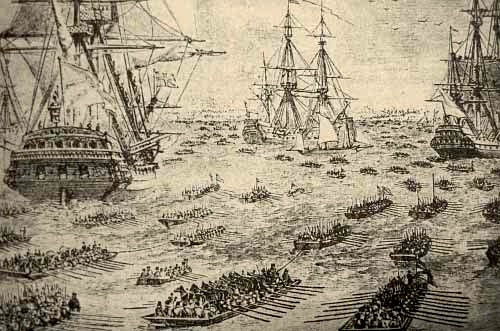 If you call the largest expeditionary force of the entire 18th century enormous.

And what did all those Brits do on Staten Island? Raped people, mostly.
The fair nymphs of this isle are in wonderful tribulation, as the fresh meat that our men have got here has made them as riotous as satyrs. A girl cannot step into the bushes to pluck a rose without running the most imminent risk being ravished, and they are so little accustomed to these vigorous methods that they don’t bear them with the proper resignation, and of consequence we have most entertaining courts-martial every day.

To the southward they behaved much better in these cases, if I may judge from a woman who having been forced by seven of our men, [came] to make complaint to me “not of their usage,” she said—“No, thank God, she despised that,”—but of their having taken an old prayer book for which she had a particular affection.

A girl on this island made a complaint the other day to Lord Percy of her being deflowered, as she said, by some grenadiers. Lord Percy asked her how she knew them to be grenadiers, as it happened in the dark. Oh, good God, cried she, “they could be nothing else, and if your Lordship will examine I am are you will find it so.”

All the English troops are encamped, or in cantonment, upon this island, as healthy and spirited a body of men as ever took the field...
—Francis, Lord Rawdon, to Francis, tenth Earl of     Huntingdon, Staten Island, August 5, 1776