The Westside Rifle and Pistol Range on 20th Street is a no-nonsense firearms training facility located in the basement of a 12-story building with fancy stone and iron balconies. In other words, my kind of thing. It takes a while to find the entrance, but when you open the back door of the lobby and hit the stairs down to the basement, you can already hear the pow, pow of guns. A second ago you were walking down Fifth Avenue; now you’re among folks with a thing for deadly force. It’s a little surreal.

“I get teachers, doctors, lawyers,” says Johnson, the manager. “I get people in the public school system. I get men, women...” A lot of security and law enforcement personnel, but the regulars are united by a simple love of guns. Johnson says he came in years ago for a hunting license, and fell under a spell. “For me it’s more of a zen thing, being able to reach out—” he aims an invisible pistol “—and touch something at a distance.” 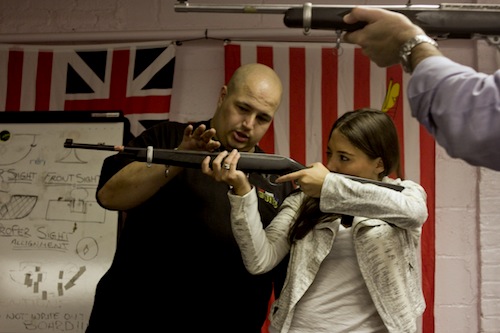 You can do this, too. If you’ve gone through the first-timer application process (not a big deal, but don’t bother if you’re a felon), within minutes of walking into the place you’ll be holding your own .22 target rifle and listening to the expert instruction of “Tiny” John, who looks like he could shot-put a refrigerator. John is quick, funny, and eerily skilled with guns. When I observed that my rifle shot consistently high and to the left, he took it from me, strung an inch-wide strip of cardboard out about thirty feet, and made a pretty line of holes right up the middle. Then he went to work on my card: In the photo at the top of the post you can see the tiny black dashes he made around the word “New;” in the video he draws a Smith & Wesson 9mm and neatly punches out the one on the right.