or: THE MESSINESS OF HISTORY If Civil War General Daniel Butterfield is famous—it’s debatable—the main reason would be the military bugle call “Taps.” The general is supposed to have written it. Except he didn’t, really. And the statue of the man that stands in Sakura Park in Upper Manhattan is supposed to look like him. But it doesn’t, really. And Butterfield is supposed to be a swell guy, but he was actually a bit of a conniving jackass. The monument, the history, the man: it’s all screwy in seven different directions, and the bronze statue is my candidate for Official City Representative of the MESSINESS OF HISTORY.

The City plays a role, here. Next to the Butterfield statue is a Parks Department sign that keeps things simple: it claims the general was “the composer of the mournful bugle call Taps,” period. Park signs are none too accurate; I once asked a librarian at the New-York Historical Society what he thought of them, and he stiffened and rolled his eyes like he’d been smacked with a cartoon frying pan. Why the real origin of the bugle call interests me, I have no idea. Maybe because Taps is so lovely, when it’s played right it can make my hair stand on end. This is played right: In 1862, the simple melody replaced the traditional military “Lights Out” call. One legend has it that a Union captain, after hearing a Confederate soldier groan all night in a ditch, finally crawled over in a fit of pity and, when he held a lantern over the dying man, recognized his own son (who had been “studying music in the South when the war broke out”). Because he was a Confederate, the boy was refused full funerary honors: only one bugler was allowed. Lucky, then, that in the son’s pocket was Taps written out complete: the captain had the bugler play the original composition, everybody felt terrible, and a military tradition was born. The story, of course, is totally ridiculous.

But the truth is slippery. Historians agree that the first person ever to play Taps was bugler Oliver Wilcox Norton; according to the fairest version of the story, he and General Butterfield sat down and wrote the new call together after a battle. But in his own account, Norton slips in a couple of embellishments:
General Daniel Butterfield, then commanding our Brigade, sent for me, and showing me some notes on a staff written in pencil on the back of an envelope, asked me to sound them on my bugle. I did this several times, playing the music as written. He changed it somewhat, lengthening some notes and shortening others, but retaining the melody as he first gave it to me. The original tune, the pencil, the charming envelope: it’s all made up. The account has to be squirrelly, because Butterfield couldn’t write a note of music. We know this because Butterfield wrote in a letter:
I can not write a note of music.
Butterfield could play the bugle, though: he picked it up as part of a commanding officer’s standard skill set. According to the general, he didn’t think the traditional evening call was “as smooth, melodious, and musical as it should be,” and sat down with Norton to improve it. In other words, Butterfield took the existing song, and went to work on it. The existing song was the first eight measures of Lights Out, otherwise known as “Tattoo.” You can hear the DNA of Taps about 14 seconds in. Tattoo is an ancient bugle call, and as it happens even the name “Taps” originates there. This from Jari Villanueva, the Arthur Fonzarelli of bugle call historians, and the source of most of the above:
Tattoo may have originated during the Thirty Years War (1618-1648) or during the wars of King William III during the 1690s. The word tattoo in this usage is derived from the Dutch tap (tap or faucet) and toe (to cut off). When it was time to cease drinking for the evening and return to the post, the provost or Officer of the Day, accompanied by a sergeant and drummer, would go through the town beating out the signal.[...] Tattoo was also called Tap-toe and as is true with slang terms in the military, it was shortened to Taps.
When you compare the original with the smoother, more melodious version, you have to give Butterfield a lot of credit: he may not have invented the song, but the man had an ear. So the Parks sign says that the general composed Taps: only part of the truth. I knew this going in. I got thoroughly bit, however, by another detail. The statue of the general was created by sculptor Gutzon Borglum. Although his name sounds like squelching mud, Borglum was no slouch. You know him from this: 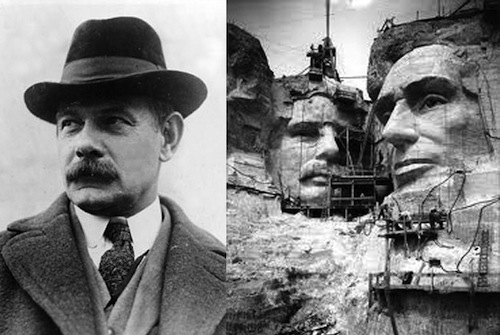 Borglum, as the Parks sign notes, annoyed Butterfield’s widow because the statue didn’t look enough like her dead husband. Borglum said: sue me. She did; he sued back; feelings were hurt. Borglum, the sign claims, “was asked to modify his design so extensively that he signed the piece on the top of its head, commenting wryly, ‘That is the only part of the original statue they didn’t make me change.’” I love that “wryly.” Especially since it seems to be made up. We pick and choose our bullshit: this signed head was the reason I wanted to write about Butterfield at all. It’s the kind of thing you want to pass on to others: That statue? You can’t see it from the ground, but the artist signed the top of the head in a rage! The book was already in proofs before I pondered for a moment the reputation of Parks Department signage. I biked up to Sakura Park with a video camera and a 12-foot pole, and...you can guess the rest. No signature (that I can see). And anyway spiteful head-signing loses its force when you’ve already signed the general once. Take a gander at Butterfield’s left bootheel. Gutzon Borglum, there the whole time.